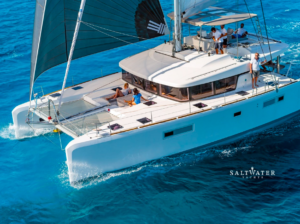 We recently sailed in the British Virgin Islands on S/V Haxter Baxter –  a beautiful, brand new, Lagoon 52 from Navigare Yachting. Our  9 guests came from Kentucky, Massachusetts, Florida and South Carolina bringing gifts and supplies and eager to support the BVI people and economy by patronizing the restaurants, bars and businesses that have worked hard and been fortunate enough to re-open after the catastrophic blows of two CAT 5 hurricanes 3 months ago.

No Slides Found In Slider.

Here is a walk through the interior of Haxter Baxter, except the port forward double stateroom and the crew cabin:

Our cruise started on 1 December at the Navigare base in Fat Hogs Bay, Tortola. Eight guests came through St Thomas on a non-stop Delta flight from Atlanta and one came through San Juan to Tortola on Cape Air. By 6PM we were all on board and walked a short distance to Red Rocks Restaurant.

Red Rocks is a waterside restaurant that the staff had worked hard to restore to pre Hurricane Irma condition. We all had excellent dinners including sharing a couple of delicious desserts. Returning to the boat, everyone was quickly in bed after a long day of travel!

2 December – after provisioning at the nearby Riteway market, we got underway about 1000 for Deadman’s Bay, Peter Island in light air. Motoring across Sir Francis Drake Channel, we were one of three boats between Virgin Gorda and St. John! We anchoring in Deadman’s Bay with a short swim to the beach. A beach sweep gathered several bags of trash and other debris. While Peter Island Resort is out of action for awhile, the beach and bay were fantastic!

After lunch, we sailed over to Soper’s Hole at the west end of Tortola. It looked like Voyage Yacht Charters had many new boats at the dock. Most of the buildings were either heavily damaged or destroyed. However, Pusser’s has opened a 2nd floor bar serving drinks and bar food. After a couple of rounds of drinks and appetizers, we went back to the boat that was swinging on a mooring.

NOTE: Most harbours had moorings. However, with 3 months of no use, the pennants have a lot of growth. Watch for chafe and hand cuts! Strongly advise snorkeling the mooring, if the wind is blowing….

Dropping the mooring in Sopers Hole, we headed over to Great Harbour, Jost Van Dyke. We were on of 5 boats for the night. Foxy’s was open for drinks and dinner. Had a great time chatting with Foxy. Unfortunately, most of the businesses along the waterfront did not fair well, nor did the church or school.

Some of us had a bite to eat at Foxy’s, while the rest of the crew ate dinner aboard.

3 December – morning was beautiful and great conditions for some SUP boarding! Later in the morning we went back to Foxy’s and made arrangements to distribute backpacks with supplies to the JVD school children on Monday. After some shopping in the gift shop, it was lunch with cheeseburgers and Irma punch!

After lunch, we went around to White Bay and anchored for the night right off of the Soggy Dollar. It was the grand re-opening of Soggy Dollar. A beautiful beach, painkillers and warm water for the afternoon. That evening, we watched the Full Moon rise over White Bay.

4 December – After breakfast and some SUP boarding and beach walk/runs, we moved back to Great Harbour. On shore, we met Janice Graham at Foxy’s and headed down to the Elementary School and the Methodist Church. While waiting for a school break, we watched Grenada electric linemen hoist a transformer up a pole with line and truck (no cherry picker needed!) in SIX MINUTES!

After meeting with the principal, we distributed 28 packpacks with supplies to the children